Marvin Wright Jamaican born, son of an entrepreneur who grew tobacco, is a cigar connoisseur and entrepreneur, developing Blue Mountain Cigar with His wife Jacqueline in April 1995.

He spend many years in Cuba where developing his passion and appreciation for premium cigars and eventually landed in Nicaragua.

Blue Mountain Cigar now makes cigars in Nicaragua using many of the old Jamaican traditions of cigars making as well as many of the techniques and philosophies he learned from Cuban growers and master blenders.

When you tried the cigar, start off entirely as a Connecticut, then halfway will hit the Ecuadorian Habano, finally a Brazilian Mata Fina Maduro.

Also called as unique and unusual cigar, it start off mild-to-medium and works its way up from three, and looks and smokes like no other cigars.

The tobaccos used in this blend are meticulously nurtured and aged for the utmost in quality. Each leaf of tobacco is inspected carefully throughout each step of creation process and exclusively hand-selected and rolled in limited batches. 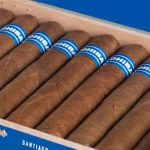